Menu
Myers Park Home Renovation
This older home in Myers Park (built in the 1930’s) with plaster walls needed a major facelift from a previous renovation in the late 90’s. The couple had bought the house but had waited a few years todo any work on it. They had 3 boys ages 4 and under, so all furniture and fabrics needed to be kid friendly!
For the foyer, the plan was to make the original black and white checkered marble floor the showpiece by taking out the other patterns that were on the walls and in the stair runner. We selected a subtle cream faux grasscloth wallpaper for the entire foyer and upstairs hallway to match the trim and hide the imperfections of the dated plaster. The runner was custom made with the black border to coordinate with the navy border rug in the dining room.We removed the dated red wallpaper in the dining room to brighten the space and had taken an inspiration photo she had sent with a navy and white geometric chair as inspiration for the wallpaper–that was a leap of faith on their part–they were nervous to wallpaper the whole room. The chair rail and shadowboxes were added and all of the trim and plantation shutters were painted creamy whiteOC-17 White Dove by Benjamin Moore to coordinate with the wallpaper but not be too much of a contrast to the existing cream trim throughout the home.
The furniture in the dining room was theirs and we updated the chair seats with a navy/white houndstooth pattern and recovered the host/hostess wing chairs (originally in the family room) in the slate blue wool. The white buffet under the window was an addition on our part, as well as the chandelier, drapes, wallpaper, paint and rug. For the family room, we painted the green walls SW Repose Gray to keep a neutral palette and designed custom-built ins to fill in an awkward empty space next to the fireplace to create one large focal wall.  Trim and sconces were added above the fireplace to give it more detail, and there is a neutral gray grasscloth wallpaper behind the TV in the built-ins for texture.
The daybed was custom built so there was a way for guests to face either the sectional sofa or the two Bobbin Spindle chairs in the front of the room. It also gives a TV lounging spot for the husband. The lower console table under the window was custom built to slide under the window sill and also store an existing storage ottoman the couple had that we recovered in Gray stain resistant velvet. 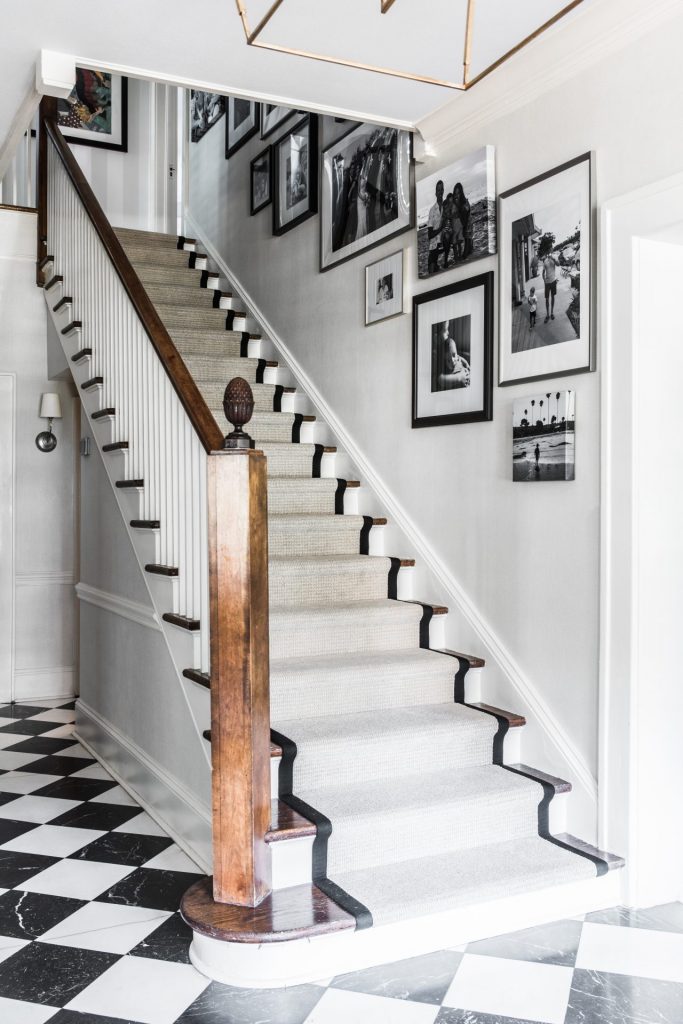 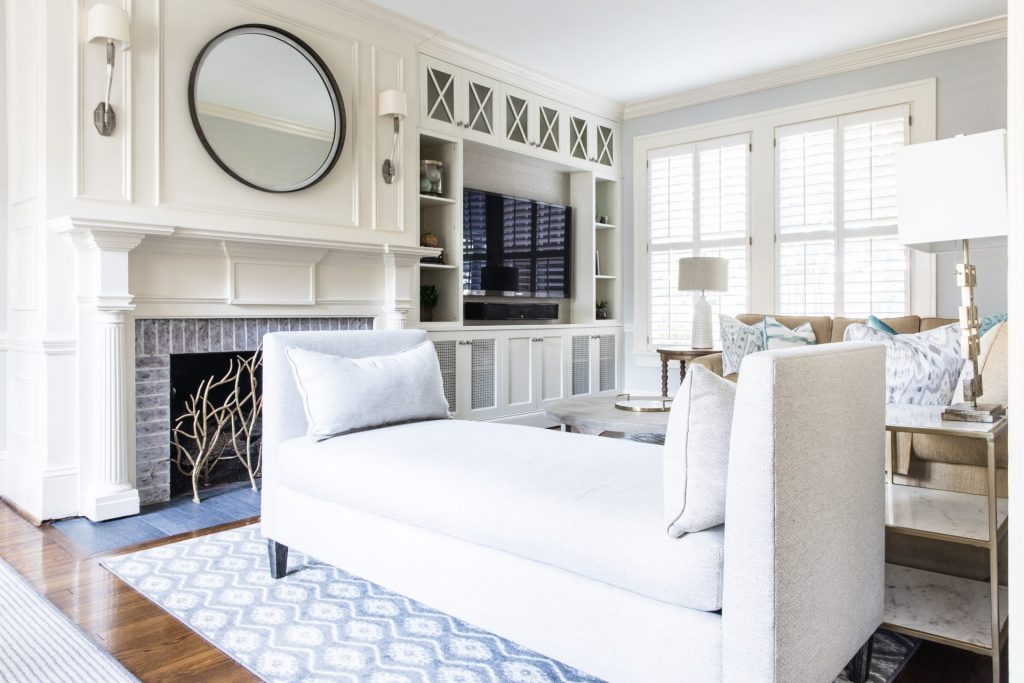 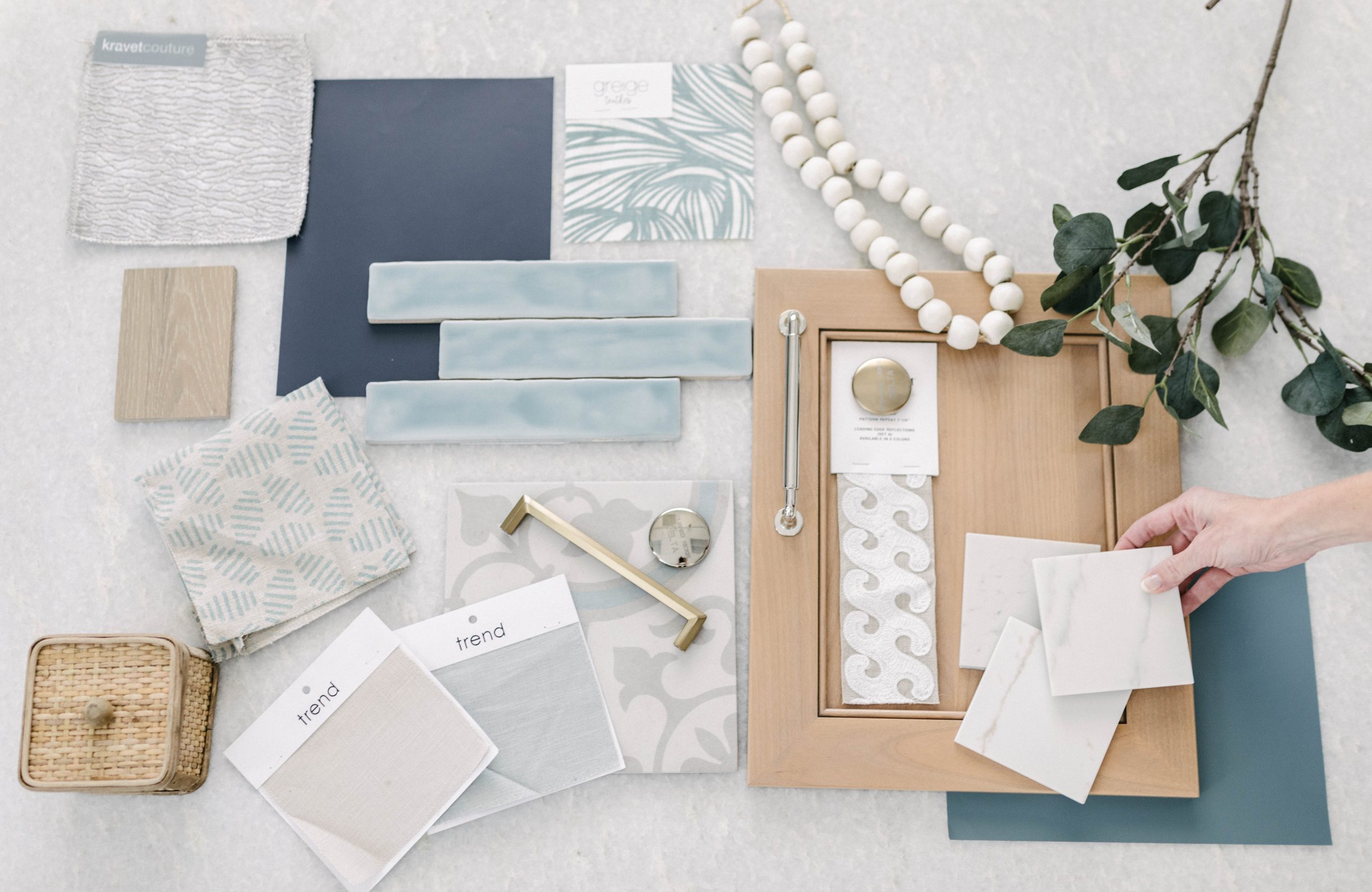 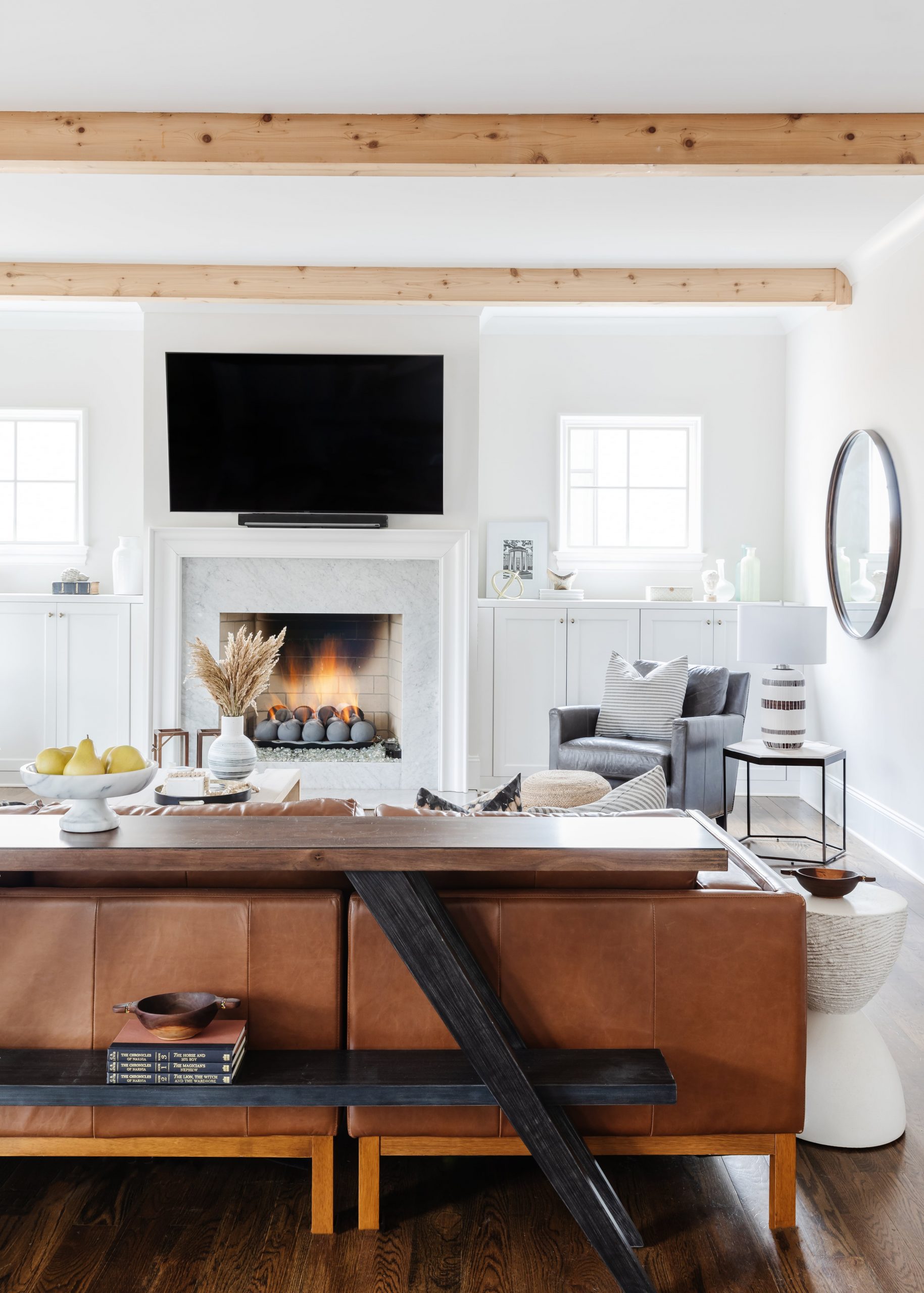 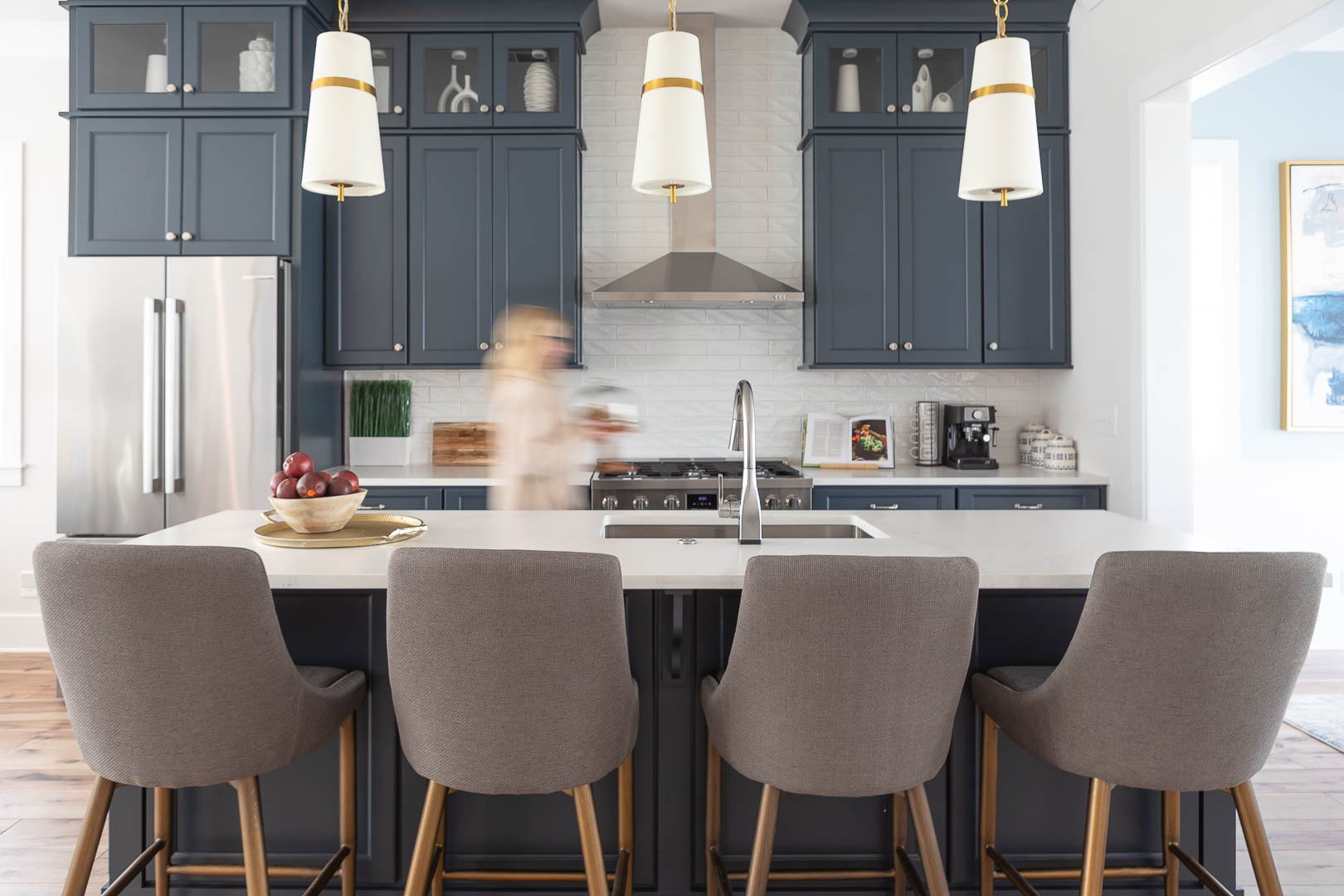 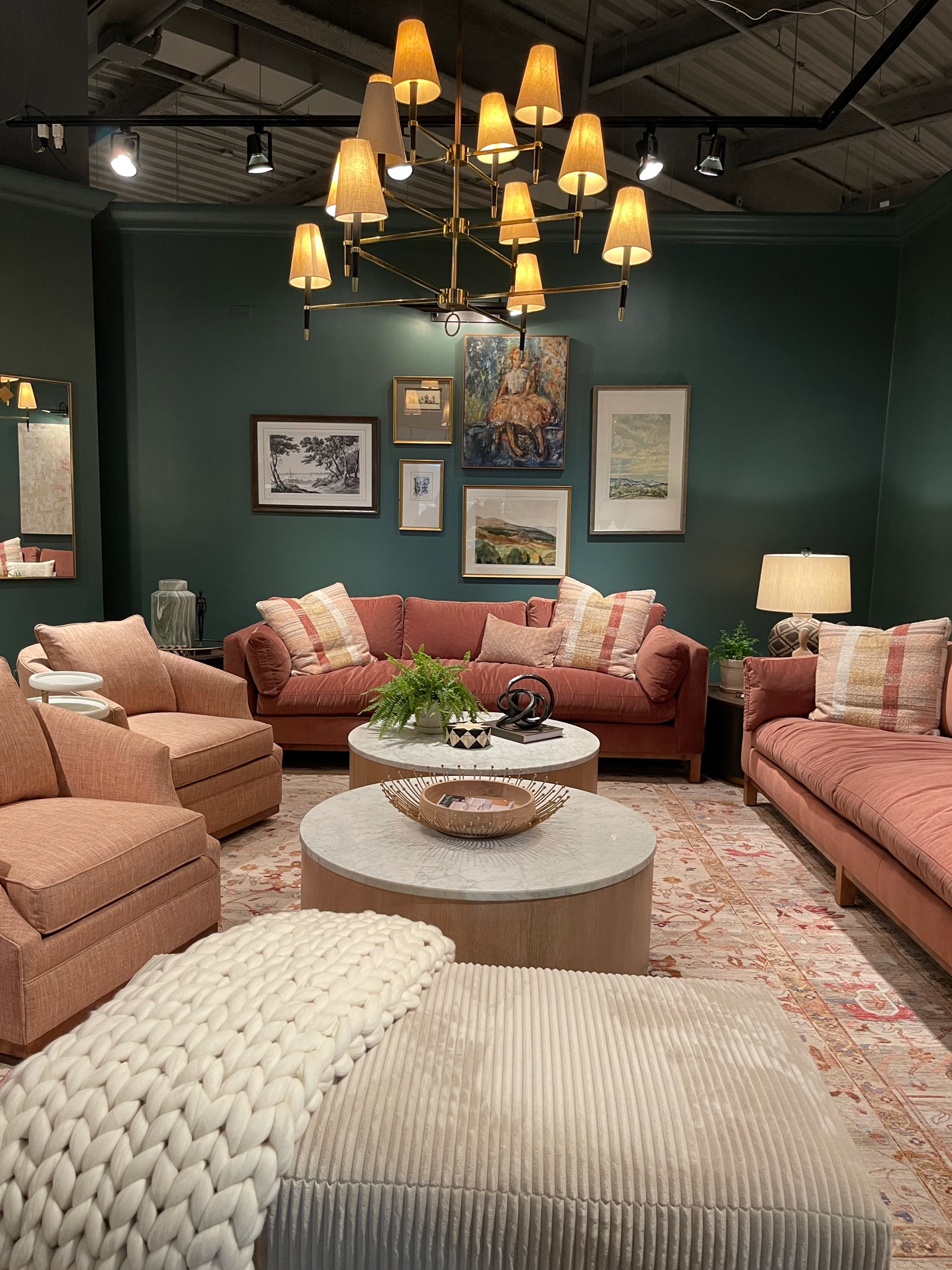